I am putting it in writing that will be forever searchable on the internet that if I ever become a famous scientist and discover something that med students will have to one day study, I will not name it after myself.

Let's say I discover a new type of cell in the body that no one has ever seen before. And let's say this cell has a big blue blob in the middle of it - would I name it Elena Cell? Noooo, I would not torture future med students that way (plus, they'd probably spell it Elana Cell on exams, and I would get super annoyed by that for eternity). Instead, I would name it the Big Blue Blobby Cell. That way, when future med students are studying they can be like, "Wait, what's the name of that cell with the big blue blob? Oh yeah, the Big Blue Blobby Cell, how logical!" And maybe no one will remember my name as the famous scientist who discovered it, but at least they won't hate me with the same venomous passion that I have for people like Dr. Albert Adamkiewicz or Dr. Hans Kohn, or really anyone on this list - although, I have to admit that I am ok with there being an element called Einsteinium, he can totally have that one. 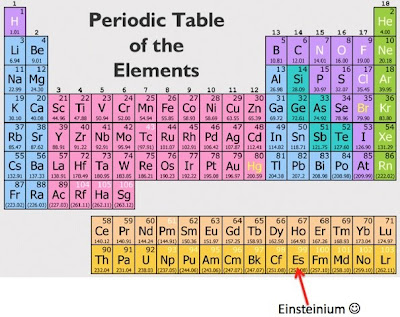 I know sometimes it's not the scientists who name things after themselves - it's other annoying people who do it later to honor them - but I still hate Adamkiewicz and his stupid anterior segmental medullary artery.

Email ThisBlogThis!Share to TwitterShare to FacebookShare to Pinterest
Labels: i.hate.eponyms.