Dissecting: The Good, The Bad, and The Ugly

Today, just the good. Sorry it's long, but there's a lot of good stuff about dissecting!


Dissecting a body is definitely one of the weirdest experiences I’ve ever had, and probably will ever have. First of all, I find it crazy how much every body is the same (except you, reader, you’re special and unique!). Of course we learn about so many birth defects, but what I’m amazed by is how often things go right, considering how complicated everything is inside us. Where things are in the body and where things go and drain and lead to, etc, etc, are so consistent (most of the time). Maybe I’m some naïve first-year student, but I truly am amazed by how good our bodies are at doing what they’re supposed to do. I wonder though if I’ll still feel that same way as I go forward in school and learn about more things that can go wrong.

So my favorite part of dissecting was getting to see and open up the heart and lungs. The lungs were cool because they were surprisingly squishy, and you could also immediately tell the smokers from the non-smokers. The heart was amazing to see because it is such a perfect example of form following function. Getting to open up all the chambers and follow where the blood would run, and seeing the valves – it just all makes such perfect sense, and I like things that make sense.

I also really liked seeing the inside of the kidneys – I don’t know why I liked it so much, but they just looked exactly like the pictures in the book, and they were so much smaller than I was expecting so that I felt like I was holding a mini-version of a kidney, and the first word that came to mind was “cute.” I know, that’s weird. How could a kidney be cute? But I swear it was – the kidneys are seriously adorable. But 180 liters of liquid run through these teeny tiny structures every single day to be filtered – I couldn’t believe it. I still don’t really believe it.

The other thing I really enjoyed about dissecting in general was getting to check out other groups’ bodies. As similar as all bodies are, there are always some surprises. For example, when one group found their heart, there were wires sticking out of it! Robot cadaver? I wish. But it was just a surprise pacemaker. Another group had staples down their rib cage, two groups had cadavers with undescended testicles, one group was missing the gallbladder, and another group had a gallbladder that was enormous! And some of the smaller arteries – uchhh – they are all over the place. Consistent enough to survive I guess, but seeeeeriously, they do not all follow the same path, and that is kind of annoying for those of us who are trying to study for an exam (while we’re on the topic of annoying things about studying for an anatomy exam – why aren’t our bodies completely symmetrical???? That would make my life easier). 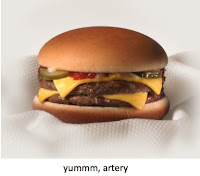 The biggest variation between bodies is the size of the muscles and the amount and surprisingly, the color, of fat. Some groups have to spend almost their entire lab time just digging through stuff to get to what we’re actually looking for. One time, one of our professors pointed out an atherosclerotic artery and didn’t even refer to it as an artery, but said “ok, here’s the cheeseburger…” It really made me almost want to start going back to the gym. It also really made me wonder: at what point in a doctor’s career do you start getting cynical?