Finals: Some are Scarier than Others

Sorry for the long delay on posting, but I am officially finished with my first two classes of med school, and I am still alive! The finals for the two classes were completely different. Today you get to learn about the shelf exam, and tomorrow the OSCE. Spoiler alert: the OSCE was infinitely times scarier.

So, our MGM (aka biochem and genetics) final was last Friday. As many of you know, that was awesome timing because it allowed me to actually enjoy my birthday this weekend (thanks to those who were part of it!). Throughout the class, we had three non-cumulative tests, and then a cumulative final a mere ONE AND A HALF days after our third test. That sucked. The final was actually a national biochemstry test, scored and curved by a national board (aka our professors were too lazy to write and grade a final exam - I'm joking, they had good reasons, see below).

This national exam is called the "shelf." There is a shelf exam available for each course/topic in medical school, and it is a way of assessing your abilities in a subject in comparison to the rest of the country. This also means that based on how your class does as a whole, you can see how your med school ranks in comparison to others in specific subjects.

Here are my thoughts on taking the shelf exam instead of a final written by our own professors:

Con: The test doesn't necessarily follow what we focused on in class, so it seemed like the test was missing questions on topics we had covered really well, and vice versa - I definitely came across some (many?) questions on things that I am positive I had never seen before, and let me tell you, that is not a fun feeling during a test. But at least it's curved.

Pro: Getting used to these kinds of tests starts preparing us for the USMLE Step 1 which we take at the end of second year and is super important for getting into residencies. The Step 1 is also a national, standardized exam that will not be prepared by my professors. 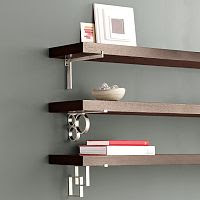 a different kind of shelf
Level of scariness: Same as any scantron test. Even less scary because we were so tired and burnt out from studying for Wednesday's exam that by Friday we were all just ready to be done.
[fun fact: they are supposedly called shelf exams because they are "off-the-shelf," meaning ready-made as opposed to custom-made]
Posted by elena welt at 2:32 PM