Getting to Banos for the weekend felt a bit like a miracle. You have to take a half hour taxi ride to the bus station, and then the bus station was the most overwhelming place ever. At a normal bus station, there would be windows where you buy tickets for the different buses. Here, they also had people yelling out the windows or standing around outside the windows just screaming the city names at you. Like as you're walking, someone will come up to you and yell, "Puyo Puyo Puyo Puyo Puyo" in your face and try to convince you to come to their window - even if you have no intention of going to Puyo. Our cab driver (who at the time we thought was a miracle worker, but he totally charged us double a normal fare) actually came into the station with us, bought us our tickets, walked us to the bus, and made people switch their seats so that we could all sit together.

Banos is this teeny tiny spa town right next to a volcano and surrounded by mountains and the rainforest. It's really touristy (for foreigners and for Ecuadorians on vacation too) and adorable. We got in around 11 pm on Friday night, dropped our bags off, and went right out. The whole town is about 20 by 20 blocks, and there are a few that have the bars and clubs and late night eats. Everything closes and everyone goes home at 2am on the dot.

We splurged a bit to stay at a hotel instead of a hostel, and it was such a good choice. The showers were unbelievable, breakfast was included, the rooms were clean and nice, and we had a hammock on our balcony that overlooked the garden! Life doesn't get better than that. 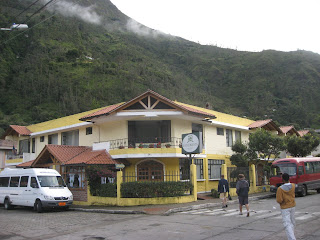 Other than its spas and hot springs (for which it's named), Banos is known for its outdoor activities - hiking, biking, horseback riding, canyoning, zip lining, etc. There's one main road that leaves the town and there are different stop off points to see different waterfalls or that lead to different sites. The streets of Banos are basically lined with tour groups and vendors, so on Saturday morning we just picked one that looked good. We ended up renting these dune buggies for a few hours to take us from place to place.

At one stop, one of the buggies wouldn't start and Jenna and I had to jump start it (apparently the guy only explained to us what to do if something went wrong, and not to everyone), so that was pretty cool. We realized about halfway through that the guy we rented them from didn't ask us for any information except our names and hotel - no money down, no credit card or passport info, no drivers license, absolutely nothing. We totally could have stolen those dune buggies and driven straight home to Quito. 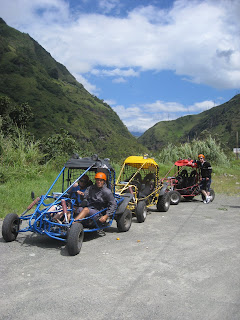 We went on this crazy long zip line, and then hiked back up to our dune buggies. It was so unbelievably beautiful. The pictures don't even begin to do it justice. All day we couldn't stop talking about how pretty everything was. And it was sunny and WARM.

When we brought back the dune buggies, we actually had lunch at an Italian restaurant. The pasta was fine, but the pizza was so surprisingly delicious, although one of the boys had heard from someone that you just have to try the pizza in Banos, so maybe it shouldn't have been surprising. Does seem random though, right? 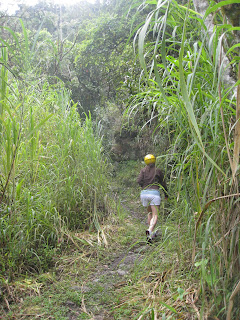 After lunch the boys went rafting, but Jenna and I opted out (I've never been a big a rafting fan) and had a nice relaxing afternoon that included a full body massage, the best ice cream in Ecuador (according to their sign anyway - I myself am not convinced yet), and candy shopping. Apparently Banos is famous for its taffy called melcocha - in all the little stores on the streets there are people making it and giving away free tastes (my favorite thing ever!), so I bought a few packs of different flavors to bring home.
taffy making: 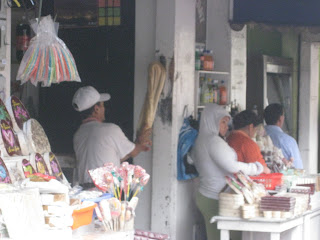 When the boys got back, we walked over to the hot springs for some jacuzzi time before dinner. It ended up being really nice, but only after a few minutes of getting used to it. The water is sort of brownish from all of the minerals, so even though it's clean, it really doesn't look it. On top of that, the springs were also really crowded, and with a lot of people wearing inappropriately little bathing suits with a loooot hanging out which added to the sense of skeevy dirtiness. Jenna gave it the very apt name of "flesh soup." I know I'm painting a very beautiful picture here - but really after a few minutes you were able to ignore all the people around you and just enjoy the hot tubbiness of it all. And jumping into the freezing cold spring and then back into the hot one gave you such a rush.

On Sunday we did this great mix of hiking and ziplining. A truck drove us out into the rainforest, and we had two guides who took us around from zipline to zipline. We would hike until we got to a zipline, we would all ride it, and then we hiked to the next. About halfway through it started pouring, but it just sort of added to the feel of it all. Again, the views were so beautiful - even while on the zipline and looking around it felt like fake scenery. 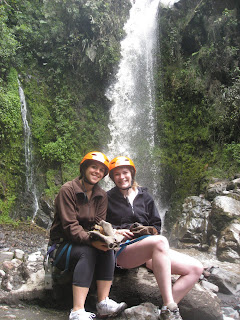 We had a really late lunch at this restaurant called Cafe Hood which Lonely Planet described as "mostly Tex-Mex with a splash of Thai, Greek, and Indian." And that's exactly what it was. Totally weird, but kinda interesting. We caught the end of the USA-Japan game, then did a little souvenir shopping, and got back on the bus to Quito (even in the small town of Banos, people at the ticket booths were yelling in your face "a Quito a Quito a Quito a Quito a Quito").

And so our first weekend was very much a success! We are officially crossing "jungle" off our list of climates to experience while in Ecuador. We have the bug bites to prove we were there.