Days 1 and 2: Sunday and Monday

We flew to Quito on a Central American airline called TACA. We got lucky with an exit row on both flights, so we had lots of extra leg space. We also had a meal on BOTH flights which was unbelievable because anyone who knows me knows I love terrible fake airplane food, and apparently so does Jenna! We considered getting a glass of wine with breakfast on our first flight to help us sleep, but decided 6:30 am was too early for drinking, even on vacation. On our second flight though, we ordered a bloody mary with our "meat pocket" (that's what was for lunch), and it was free!

We weren't sure what to do with ourselves on Sunday night, but since we were so tired, we decided if we went to the mall to have dinner and brought back a bottle of wine, we would just pass out early. We also figured that we could use the bathrooms in the mall instead of the dinky one in our apartment.

There were two problems with our genius plan though. Number one, the bathrooms in the mall are for preferred shopping members only, which means you need some kind of special credit card and code to get into them. So that was a no go. There are also blue laws in Ecuador which means you can't buy alcohol on Sundays. But the very nice man in the liquor store told us if we waited around until everyone left the store, he would sell us a bottle of wine. So we waited around and got our wine. Of course they didn't sell corkscrews though, that would be too easy. But the man told us about another store in the mall where we would be able to find one, and said that if we couldn't, we could come back and he would just open it for us. But we luckily found one, and fell asleep by 8pm. 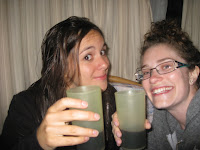 happy with our wine!

On Monday we were told to arrive at school at 1 pm. We slept a good 12 hours and then had our first adventure on the Ecovia, the bus in Quito for our first breakfast - a German crepe place in La Mariscal, a neighborhood also known as "Gringolandia" (land of the Gringos, or Americans - we are not trying to be anything other than the tourists we know we are). Although we found it without a problem, it took longer than we thought, so we didn't have much time to walk around and explore the neighborhood. Breakfast included a crepe for each of us, toast with butter and jam, orange juice, coffee, and a dessert chocolate crepe (ok, we ordered that one separately - it just seemed too delicious to pass up). We were a little worried about the juice since it's on our list of things to be careful about consuming, along with water, vegetables, and street meet. But we are still four days diarrhea-free! Hurray! Keep your fingers crossed that that doesn't change anytime soon. 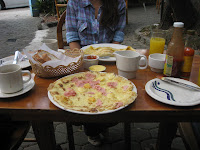 
Class is interesting. My professor, Manuel, is great. Everyone takes a quiz on the first day to see where you stand with Spanish, and you work on what you need. Other than some grammar exercises, I basically spend the four hours just chatting with Manuel in Spanish.

Wednesday and Thursday (today) have been much more cultural days. But these posts somehow take me forever to write, so you may have to wait until tomorrow or after the weekend for another update!
Posted by elena welt at 5:32 PM