On Saturday we took a trip to Cotopaxi, the highest active volcano in Ecuador. It was so beautiful out in the morning, so we were very excited not to repeat our Teleferiquo experience of not being able to see anything as we hiked. We met at 7 am to take a really really long bus ride to the volcano. Here we are stuffed like sardines in the van, happy as clams because we had no idea yet what we were in for. Little did we know what the weather would turn into. 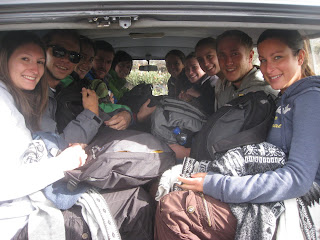 Here's a picture of Cotopaxi after we hiked and had come back down. Please take note of all the snow. 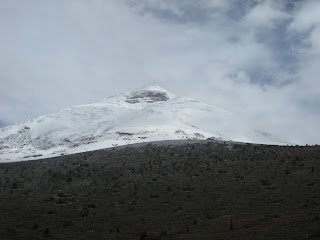 The higher we drove, the colder it got and the snowier the ground got. By the time we reached the starting point of our hike, it was snowing and freezing. While they told us to wear "warm clothes," I was expecting Quito weather, not a hail storm. Because as soon as we started hiking, that's what we encountered. Hail that hurt your face if you try to look up for even a second, and a few inches of snow on the ground mixed with mud that seeped into your shoes with every step.

Look how happy Jenna was to be hiking in these amazing conditions: 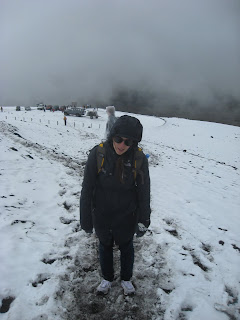 On top of that, because we were so high up it was sooooo hard to breathe. At least that was expected though. But I was still surprised at how much trouble I had. I was laughing at myself because every step I took it felt like I had run a marathon. But every time I laughed, I got so out of breath that I had to stop walking. It was so hard!

Finally we made it - 4800 meters! That probably means nothing to everyone in America, but I have no idea how many feet that is. I do know it's lots and lots of feet though. [update: this is 15,748 feet; for a frame of reference, Denver, the mile high city, is 5,280 feet] 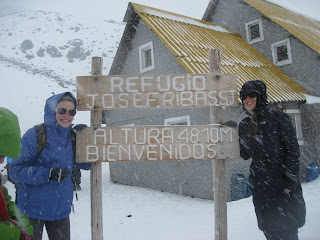 After reaching this hut in the picture, we were going to take a break and then continue hiking up to a glacier. But because the conditions were soooo bad, our guide decided it wasn't safe. So we hiked back down the way we came to where we started, where we were going to mountain bike the rest of the way down. Jenna and I made it about halfway down on the bikes, but ended up getting in the truck for the rest of the way. The brakes on the bike were really stiff, so we were afraid the whole way we wouldn't be able to stop if we had to - which was terrifying because it was extremely bumpy and wet, and there were lots of curves with cars coming both ways - once it started pouring, we decided we had enough, and into the truck we went (which was following behind us the whole way).

So basically we drove 4 hours, hiked for one, biked for half of one, ate "lunch" (I put that in quotes because we got chips and guacamole, fruit, bread, and soup - where's the protein???) and then drove 4 more hours home.


Fun fact though. Our guide told us on the way to Cotopaxi that the last time it erupted was in 1876. "Don't worry about it erupting while we're here though, it has a cycle of about 130 years." Uh, do the math on that one.
Posted by elena welt at 7:00 AM