Last Thursday night was one of our friend's birthdays, so we went out for dinner and for some drinks. Considering our normal bedtime here is about 10:00, it was by far the latest night we've had. Without going into details, Friday morning was the worst I've felt in a long time. But a few people were going on a class trip in the morning to try cuy, a delicacy here.

What is cuy? Guinea pig. Jenna had absolutely no interest in trying it (100% completely understandable), but I felt like since I'm here, I had to try it at least once. Let me just say: Ew. And if that's not enough, see the picture below of how it's served: 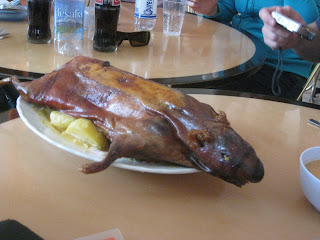 
It smells like fish. It tastes like salt. You eat the skin, but it's so tough and difficult to bite through. The meat itself is oook, apparently it tastes like rabbit (according to the Germans, I've never actually eaten rabbit), but there are so many bones that it was so hard to eat.

Now imagine having that meal when you are so hungover that you already wanted to die.

But at least I can say I tried it. And now I never ever have to again.


Side note: you're supposed to eat the head and feet too. We went with two professors who ate like every bite that us students couldn't eat, and then took all the leftovers home. I guess if you're raised with it, it's different.
Posted by elena welt at 7:02 PM