So if you remember, we are allowed to sign up for non-credit electives which are extra classes we can take throughout the year. These electives, as you might have figured out from the name, are not for credit, but they do show up on your transcript as completed if you complete all the requirements (which usually involves showing up to a certain number of the lectures offered).

One of the noncredit electives I am taking this semester is the Medical Interpreter Training Program. You're supposed to take it if you already have a second language under your belt (I don't, really), and the class met once or twice a week to learn about the skills needed to be a competent interpreter in a hospital/doctor's office setting.

Last night was our "final" for the elective - which, of course, we don't get graded on since there is no grade for the class because it is ... not for credit. The final was an OSCE. What is an OSCE? you confusedly ask. I refer you to this post where I wrote about our final for Medical Interviewing - because basically OSCEs are the scariest thing ever - you're in a fake hospital room with a standardized patient (and in this case, a standardized doctor too, because we were playing the role of interpreter), and people watch your interactions through a one-way mirror or video camera and judge you.

So we had a Spanish-speaking "patient" (a family friend of one of the girls who runs the elective) and a lovely second-year as the fake doctor, both of whom had a basic script to follow, and those of us in the elective got to interpret the visit (for the Chinese-speakers in the elective, they had a Chinese-speaking fake patient, duh).


What was the most important thing I learned from this OSCE? I am NOT ready to interpret for a real patient. I did fine, and those who run the elective gave me mostly positive feedback, but their constructive criticism was kindly worded to say that I "would benefit from a more expanded vocabulary" which was a very nice way of pointing out that (a) there were some looong pauses while I had to word-search through my brain (not too big of a deal) and (b) I interpreted some phrases just flat-out wrong (totally unacceptable in real life).

Anyway, it was nice to have one more practice OSCE under my belt since most tests I'll be taking in the future involve them. It's also nice to have been trained as an interpreter, so that when I do become more comfortable with my Spanish (hopefully after this summer in Ecuador, and I should also probably start getting hooked on a Spanish telenovela or something), I can hopefully be of service to people. In NJ and Newark especially, there is a very large Spanish-speaking population, and being able to help interpret for other doctors, or getting to the point where I won't need an interpreter myself, would make things easier for lots of people. 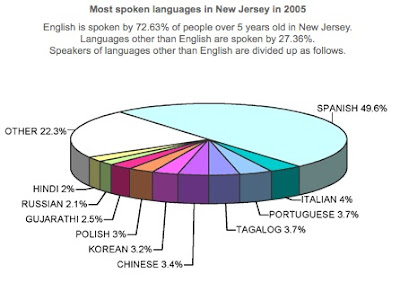 PS - there is a video of my practice OSCE now in my possession. I haven't watched it yet - I think it's better to wait until I'm better at these things so I can look back and laugh at how awkward I was. Right now if I watched it, I would have to say, "oh no, look how awkward I AM." But maybe one day I'll share it with you, keep your fingers crossed.


image from: http://www.mla.org/cgi-shl/docstudio/docs.pl?map_data_results
Posted by elena welt at 8:26 AM