The Apgar score.  Assessing babies.  You all have it memorized, right?  0-2 points each for newborn's color, heart rate, reflexes, tone, and respiration?  Yeah?  Ok good. 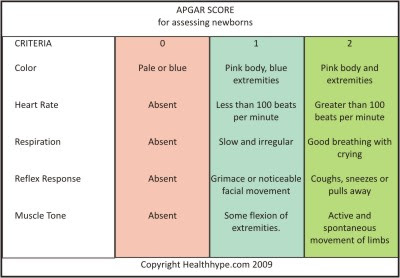 Let me tell you how awesome (the naming of) this test is.  First of all it is named for arguably one of the coolest women ever, Virginia Apgar (more about her later).  But on top of that, the test is ALSO an acronym!  Appearance, Pulse, Grimace, Activity, Respiration.  Come on, that is cool.  It's like she was boooorn to invent this test.  So even though you all know I hate eponyms (except that now that there's a whole movement to get rid of them, I suppose I'm starting to become a little nostalgic), this one is pretty bad-ass as far as eponyms go.

So let me tell you all the things I like about Virginia.  First of all, born and raised in NJ (whatup).  Second of all, she trained under Allen Whipple (this means nothing, but I have another post about him - #makingconnections).  Third of all, she was the first woman to become a full professor at Columbia University College of Physicians and Surgeons.  Fourth of all, she basically made anesthesiology into a respectable field.  Fifth of all, she developed the Apgar score and pretty much invented the field of perinatology.  Sixth of all, she was a total public health advocate (a March of Dimes director and a huge promoter of the rubella vaccination and Rh testing for mothers).  Seventh of all, her glasses!!  Eighth of all, she supposedly said (although I'm having some trouble finding a legitimate source for this and I really need to start studying) that, "women are liberated from the time they leave the womb."  Duh now, but not so duh back then.

non-MLA, non-peer-reviewed sources: National Library of Medicine, PBS They Made America
Posted by elena welt at 10:45 AM