Friday (pre-Sandy, Day -3)
Evening
Mom: You should really go and buy water and flashlights and fill your car with gas.
Me: Stop being a crazy person.


Saturday (Day -2)
Around Noon
Should I be nervous?  No, it will be a dud.  But what if it's not?  It probably will be.  Maybe I'll fill up my gas tank and stock up at Target just in case.  I'm probably being crazy.  I'm not gonna go.  I have a lot of studying to do anyway.

1:00 pm
Maybe I'm just being prepared.  Is my mom making me crazy?  Or am I stupid if I don't go?  Maybe I'm being stupid.  I'll go just in case.  I'll still have the whole afternoon to study when I get back.

3:30
Target = SO CROWDED.  At least if I'm being crazy, I have a lot of company.  And I can do practice questions on my phone while I wait in this check-out line for half an hour.

5:30
Sooo I guess I should start studying?


Sunday (Day -1)
Morning
I am really craving peanut butter and salami right now.  Think it's appropriate to delve into my hurricane non-perishable stash yet?

Immediately After That
Facebook timeline explosion of everyone in the world starting to drink and writing about their drinking and hurricane parties.  My thoughts: Thank goodness I have two extra days to study for my OSCE on Wednesday and shelf on Friday.

Later Morning
I'm going to eat some crackers and peanut butter, and then I am DEFINITELY getting through all of the OB chapters in Blueprints today.

Afternoon
I am definitely going to get through half of the OB chapters in Blueprints today.  Also, it's starting to get mildly windy.  This could be exciting.

Later Afternoon
This is feeling more like a hurricane.  Keeping everything at 100% charged at all times.  Also keeping our blinds closed because it feels like our windows are going to explode at any second.  Feeling pretty good that I got through two of the twelve OB chapters in Blueprints.

Early Evening
Seriously, what do we do if our windows explode?  Let's move the TV into the hallway that doesn't have windows.

Later Evening
Let's watch TV.  We can move the TV back just for a half hour, right?

5 Seconds After Moving TV Back
Power out.  Dammit. 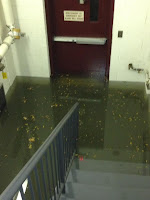 10 Seconds Later
Let's walk down the bajillion flights of stairs in our building to see what the damage is like downstairs.

20 Minutes Later
Shoot, we have to walk back up?

20 Minutes Later
We are definitely going to go through our water supply faster than expected if we keep making that trip.

1 Minute Later
You can't flush the toilet without electricity????

2 Minutes Later
Let's have a glass of vodka, eat all our melting ice cream, and go to sleep.


Tuesday (Post-Sandy, Day 1)
Morning
Still no power.  I guess I should study while it's light out.

Afteroon
Friend: Don't study, come play with me!
Me: I can't, test tomorrow, ahhh!
Email: Class canceled until next Monday, November 5.
Me: Ok let's play, I'll meet you downstairs in a second.

20 Minutes Later
Ok, I made it down all the stairs.  Let's play. 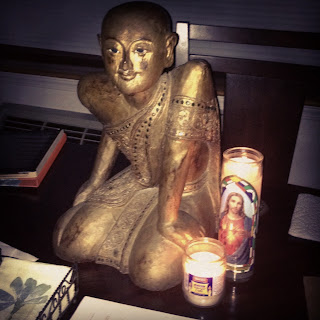 Wednesday (Day 2)
Morning
Still no power.  I reallllllly would like to flush my toilet.  And maybe shower.  And have some coffee.  I should go downstairs and see if people are talking in the lobby about when the power will be back.

20 Minutes later
In the lobby, no one knows anything.  Obviously.  Charge my cell phone in my car for a few minutes, and decide to walk back upstairs.

20 Minutes Later
Back upstairs.  Still can't flush (obviously).  Decision officially made to make the trek to my parents' house.


Thursday (Day 3)
Morning
Wake up on the living room couch.  Apparently my parents are the only ones in the tristate area with power so there are about 85 people staying in the house, and I am second to last on the waiting list for a bed (I did beat out my brother) - fiiiine Grandma, I guess you can be greedy and take my bedroom if you want.

Afternoon
Learning mah-jong, getting all my meals cooked, kinda-sorta-maybe studying.  Life is ok.

Later Afternoon
Email: Power back on in my apartment!  But being home is sort of fun, I can wait until tomorrow to head back to Jersey City.

Early Afternoon
Good-bye family and houseguests, back to Jersey City I go.

A Few Minutes Later
Holy crap, the lines for gas are so crazy-long.  Good thing I filled up my tank over the weekend.

Getting Close to the Holland Tunnel
Uh oh, here is where I turn to get onto my street and it's all blocked off.

Finally
Back in my apartment; boy it feels good to take the elevator.


Sunday (Day 6)
Email (and I'm pretttttty sure this is a direct quote): We have absolutely no idea when your make-up OSCE or shelf will be, so continue to study indefinitely, but have fun starting a new rotation on Monday and make sure you keep up with both OB/GYN studying and your new rotation.  Also the exams will probably be on Christmas or Thanksgiving night or New Years' Eve, but we won't tell you until two days before.


Monday (Day 7, Also Known as Right Now)
Scared about starting my new rotation.  I still have a mostly-full gas tank.  Seriously considering going into the gas-price-gouging business and leaving medical school behind.  Still waiting for news on the OSCE and shelf.