When I recently re-read my very first blog post, I realized I talked about treating medical school as if it was a new, FUN experience like going abroad (in the blog, not in real life - otherwise I'd be a total weirdo). That way, the blog would seem to be about all the cool new things I see and people I meet in this strange new land called med school.

While I've talked a lot about the things I do here, I realized I haven't talked much about the types I've people I've met. So this will be the first of many posts on some of the stereotypes of the people you meet here in med school land. 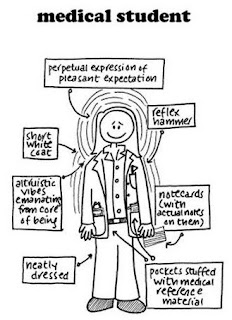 Stereotype #1: Surprisingly enough, Med Students have NO attention span.
Physiology for the most part consists of two one-hour lectures per day. That does not sound like much, but you'd be surprised at how hard it is to sit and pay attention for those two hours. And professors know this about us. Yesterday we only had one mega lecture for an hour and a half, but the lecturer still gave us a 10-min break halfway through. Really? We can't sit and listen for more than an hour at a time? Apparently not.

We've never had anything scheduled for more than three hours, and if there ever was, believe you me, there would be lots of complaints (or at least lots of no-shows).


I'm not sure how our collective antsiness is going to work out when we graduate med school and actually have to work for like, 16 hours straight (More? Less? I'm sure the hours will change again by the time we get there) and are not offered a coffee break every hour on the hour. Do residencies have class representatives and student affairs that we're allowed to complain to when we're unhappy?


(picture from "A Cartoon Guide to Becoming A Doctor")
Posted by elena welt at 8:29 AM