When travelers here go to the beach, a lot of people choose Montanita on the South Coast. it's a huge party town, known for playing music till 7 am, its drugs, and its beautiful beach. Since Jenna and I are not the bigggest party animals we know, we decided to skip Montanita and choose somewhere a little more laid back. We were told that one of the most beautiful and remote beaches was Canoa. Since it's on the North Coast, and Quito is north, we also figured that it would be easier to get to than the beaches on the South Coast - not so much though.

Unexcited about taking the 7+ hour bus ride to the shore, we instead took a half hour flight to Manta, one of the biggest cities along the coast and figured from there we would hop on a bus to Canoa, which we were told would take about 2-3 hours. Easy enough, right?

Except that while waiting to board the plane and talking about our plans, a man ahead of us (who turned out to own one of the hostels in Canoa) turned around to let us know that there are no busses to Canoa from Manta. "Uh, so how are we supposed to get there?" we asked. We ended up sharing a 2 hour taxi with him for $40.

And thank God we were with him, because otherwise for sure we would have thought that we were being taken far into the wilderness to be killed. It was 2 hours of a pitch black drive over dirt roads almost the whole way. Our new friend told us we were taking a slightly longer way because the road was smoother. That just seemed impossible though because it was the bumpiest car ride I've ever been on in my life, so I can't imagine what the "bumpier" road must have been like.

Being the obsessive-compulsive girls we are, we had tried to book a hostel in advance, but were told by all of them that they don't take reservations and you have to just show up. So we got to Canoa around 9pm and head over to our first choice hostel. "No rooms left." Eek, ok. We head next door. "No rooms left."

So let me paint this picture for you. All of Canoa is about three streets wide. There's one street that runs along the beach, and this is where all the hostels and bars are. So everyone is hanging out all over, and Jenna and I are walking, tired and starving (since we figured we'd wait till Canoa for dinner), and lugging our backpacks from hostel to hostel, to be told at just about all of them that they had no rooms.

Finally we found one which was horrible. Screaming kids, roosters outside, smelly sheets, no hot water. We dropped off our bags, went to Surf Shack for some pizza (could we be any more touristy?) and got some delicious drinks at the beachfront bars. The next morning, we booked a better hostel, and went to breakfast at our new friend's hostel. Pretty sure the restaurant was built on a beehive though, because as soon as the food arrived we were so attacked by bees that we couldn't even finis our meal. We did get a pina colada to make us feel better about the situation, but it didn't help all that much.


But fear not, the day did get better! It turned out to be really sunny, and the beach really was beautiful. It's surrounded on all sides by cliffs, and the water was sooo warm. We took a really long walk on the beach, and spent the day laying out and swimming (and of course, ceviche for lunch). 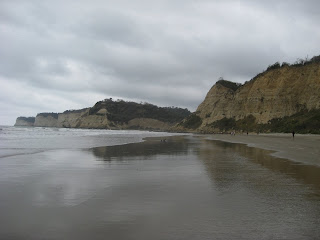 The next day was gray, so we took another long beach walk, and headed back to Manta early to see if we could get on an earlier flight. Silly us to think that would be a good idea - no one works in the airport until 5pm since the first flight wasn't until 6:30, and it was Sunday, so every single restaurant in Manta was closed. Finally we found one, got some lunch and hung out for a few hours, and then couldn't get on the earlier flight anyway, so we got to hang out in the airport for a few hours too. So fun!

We were pretty happy to be back in Quito to say the least. But our friends had gone to Banos for the weekend and they said it rained the whole time. Plus they had elections in Banos on Monday, so no bars were open for the whole weekend (you can't vote hungover, everyone knows that). So overall, fairly unlucky weekend for everyone. 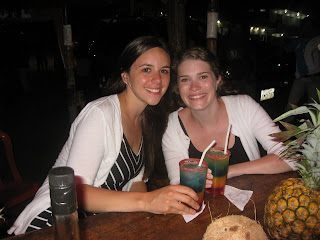 but yay, tropical drinks make everyone smile!
Posted by elena welt at 7:00 AM