Yeah, yeah, I'm pretty behind on updating. I'm going to start with last Friday. Jenna and I were planning on going away by ourselves and having a nice relaxing beach weekend. But we decided to leave Friday evening, and use Friday during the day to see La Mitad del Mundo, the place where both latitude and longitude are at 0 degrees. I've heard from more than one person that it's really not the most exciting place in the world, but it's still something you have to do while you're here. It's about an hour away from Quito by bus.

To get there, we took a taxi to basically a random intersection, and the "Mitad del Mundo" bus passes by the intersection, and we had to wave it down. Yes, we waited on the side of the road, waved down a bus, it stopped for us, and luckily we got seats. The bus probably stopped every minute and a half to let people on who were selling dvds, candy, ice cream, coloring books, chicken skewers, people who "rapped" and asked for money, people who begged, etc etc.

After about 40 minutes, we thought we saw the big monument that's right on the equator, but it didn't really feel like the right stop (especially because we figured Mitad del Mundo would be the last stop of the Mitad del Mundo bus), so we didn't get off. But after another couple minutes with the monument fading further and further into the distance, we realized that was definitely the stop. I blame Jenna because of the two of us, she has been designated the navigator because I'm useless. We ended up just getting off the next time the bus stopped, and literally stood on the highway and hailed a bus going in the other direction. While waiting on the side of the road for those 5 minutes, we were honked at 12 times. Our personal best so far. 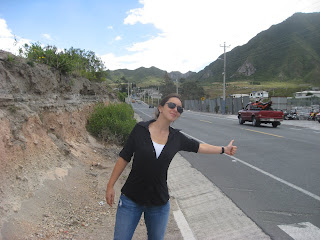 So as expected, La Mitad del Mundo was very unexciting. You pay to enter the "city" which consists of the monument, some restaurants and gift shops, and museums. The museums you have to pay again for and they are bor-ing, so we didn't go into any of them. 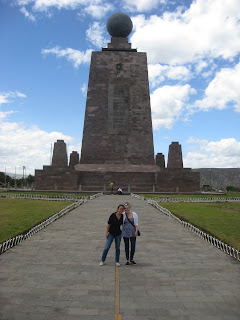 el monumento - look, we´re in different hemispheres!
(except not, because it´s not really the equator)

We took some pictures, ate some lunch, and then went to a museum that's actually outside the "city" and is free.

Because we're science nerds, it was so fun! We also had the cutest museum tour guide ever. It was his very first tour and he was sooo nervous (and he had to do his first tour in English!), but he was great and now we're facebook friends. Supposedly the equator actually runs through this museum and not through the monument (although also supposedly, the equator ACTUALLY runs through some hill that's a little further away). Whatever. 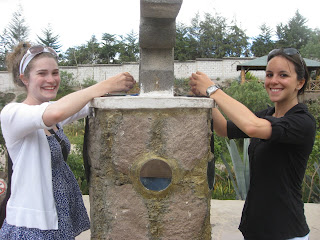 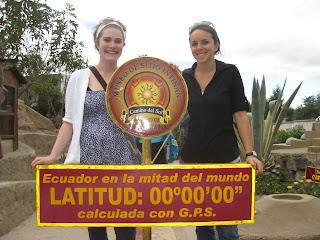 the "real" equator, maybe
Posted by elena welt at 6:44 PM