I don't know if it's the constant flow of information into my brain, the amount of hours I spend by myself, the soul-sucking USMLE World practice questions, or what ....but lately the littlest things have been able to set off either a state of euphoria or just as easily reduce me to tears and foot-stomping. 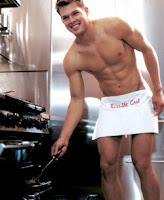 The other day I thought of the BRILLIANT idea of melting swiss cheese on an english muffin for breakfast (as if it's even an original idea..) and I was so pleased with myself that you would have thought I had just found out I won the lottery and that this guy to the left was going to serve me breakfast in bed followed by a shower of diamonds (because apparently that's my fantasy).

Now fast-forward 4 hours later and it was time for a real study break (as opposed to all the mini-breaks I take constantly).  I sit down to watch some TV and CAN.YOU.BELIEVE.IT, any channel I was interested in watching had a commercial on.  Naturally I took this terrible disappointment as a personal affront, decided God was probably out to get me, and realized I was definitely going to fail Step 1.

And that is how Step 1 studying has turned me into a crazy-pants.